I can’t believe month 1 is done! It went by so unbelievably fast!! Anyway I thought it would help to hear about the side effects that I experienced during my first month and what changes I made to accommodate them. For me personally, I tend to see the most changes that I will see in the whole course in the first month.

Before I get into side effects, I thought it may be helpful to tell you my dosage. I’m currently taking 40mg once a day and your dosage is independent to you and at your dermatologist’s discretion.

Granted, this list looks a lot but it’s all completely manageable by just making a few changes. Plus, after having painful acne for so long, these symptoms are NOTHING I can’t handle!! No pain, no gain comes to mind here!

So I thought it might be helpful to hear what changes I made in relation to the side effects above, as often I only hear people list their side effects and not what helped them with that side effect!

So there you have it, month one DONE! I haven’t mentioned it above but I also noticed my mood improve massively as my skin cleared up! Naturally my confidence increased too.

*This isn’t the case for everyone so make sure you speak to your Doctor if you notice any concerning changes in your mood.*

One other thing to mention is that roaccutane is not for everyone because like every other thing in the world, it comes with risks. However, you have to weigh up those risks against the potential benefits. You take risk everyday crossing the road, driving in your car etc. So, don’t ever let someone scare you with the potential risks of doing something. Research the thing you want to do yourself, weigh up the pros and cons and make your OWN mind up! That’s why we were each gifted with our very own mind – to make decisions for ourselves!

I’ll be back with a rundown on my new skincare routine soon and also, my month 2 update in 4 weeks time! 💗 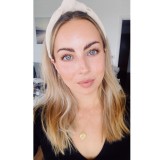 MY SKINCARE JOURNEY SO FAR